Learn how to jump higher kitesurfing & improve your Woo score

In this blog post we’re going to talk about how to jump using the kite & then go onto improving technique and bettering your WOO score as the blog goes on.

Scroll down if you can already do the basics well to the ‘How to jump higher kitesurfing’ section. Although it’s sometimes worth taking another look to see how you can improve your base technique.

As I’m sure many of you have seen from YouTube videos, the heights that can be achieved through these jumps can be dizzying, and is one of the defining features that really sets kitesurfing apart from other water sports.

So much so that Red Bull have created their own sports event dedicated to a particular type of jump; the infamous megaloop. However, before we have you jumping higher than your house, lets start with the basics.

A few safety considerations to make before you head out or learn to jump higher….

Give yourself plenty of room, both from other riders and any obstacles. When you jump, you will travel with the wind, so it’s particularly important to make sure there are no riders downwind of you, and that you are well upwind of the beach.

Don’t jump beyond your capability and confidence. Like when learning anything in kitesurfing, stay patient, take your time, and enjoy the learning process. This will ensure you progress with a good technique whilst staying safe and most importantly learn how to land properly before going too high, or it can be painful!

Always make sure your equipment is in good order. It’s a good habit to get into to checking your gear for damage before you go out riding, especially your lines and bridles. And ALWAYS check that your safety systems are working before you head out.

Firstly, make sure you have a reasonable amount of power, enough to ride upwind comfortably but not so much that you’re likely to lose control or be pulled off your edge. We want to leave the water but not into orbit while learning!

Getting airborne is the easy part, maintaining control while in the air and landing softly is the key though. Then you can confidently get higher and higher knowing you’ve the skills to land it without injuring yourself.

Creating ‘POP’ – The Take Off

Once you’re happy with the power from your kite, ride across the wind as if on a normal tack with your kite at either 1 or 11 o’clock. Increase your speed slightly and edge harder to check how much power you have from the kite. If you have plenty of pull then progressively edge harder still until you’re creating a big spray from the back of the board. You really want the spray to be around head high to have any chance of creating a good POP.

Take a look at this video to show the progressive edging and then final explosive thrust from your back leg. This is what makes the difference between going forwards and falling on your face, or going upward into a jump. Without the edging and take off, there is no way you can jump no matter what you do with the kite. So spend some time practicing this progressive edging and release from the water. The board tends to create a suction with the water while riding so this ‘POP’ technique also breaks that suction.

While edging, you’re also building up the tension in your lines, so when you do start to use the kite for lift, you’ve created a kind of catapult affect between yourself and the kite due to that high amount of tension. 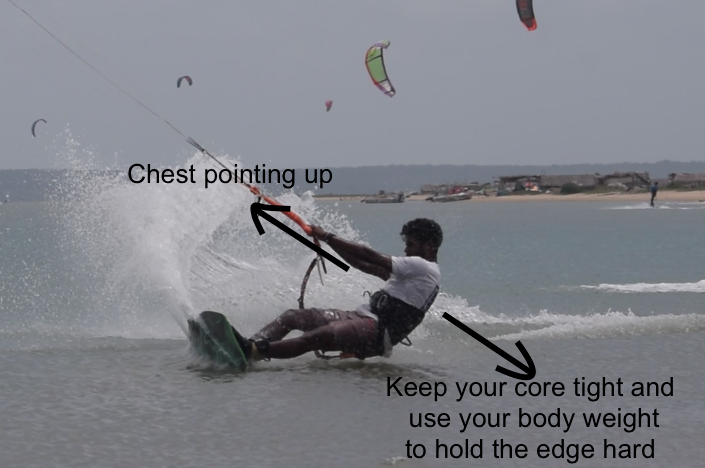 The video shows why the board speed going into the trick is important as if you don’t ride fast enough with power then as you begin to edge you’ll quickly come to a stop.

You’ll notice the rider does a little hop beforehand, so he can jam the rail of the board into the water even hard with all his weight, we’d suggest leaving this part out until you’re a little bit more advanced as it could end it a very fast crash!

The key to POP is pushing down hard with your back foot to create a spray from your board but in just a fraction of a second. The amount of pressure needed from your leg is high, so imagine you’re trying to push your back foot through the board while ‘loading it up’ or if you were stamping on a cardboard box, or tin can, and then when you can push no more, lift your front foot up to break the suction the board has between its base and the water. All in a moment, the tension you’ve been building up in the lines along with the flex from the board rebounding back to it’s original shape will suddenly catapult you forwards as the board leaves the water.

Tuck your knees up slightly in flight and point the board straight down wind for the landing as you’ll like be landing fairly fast. This will allow control of the board without having to engage an edge until you’ve run off a bit of the speed.

This is something that can be practised without moving the kite at all, and is worth spending some time on it as it’s the most important the part. The rest is just steering the kite and timing.

The Kite – So You’ve Mastered POP?? 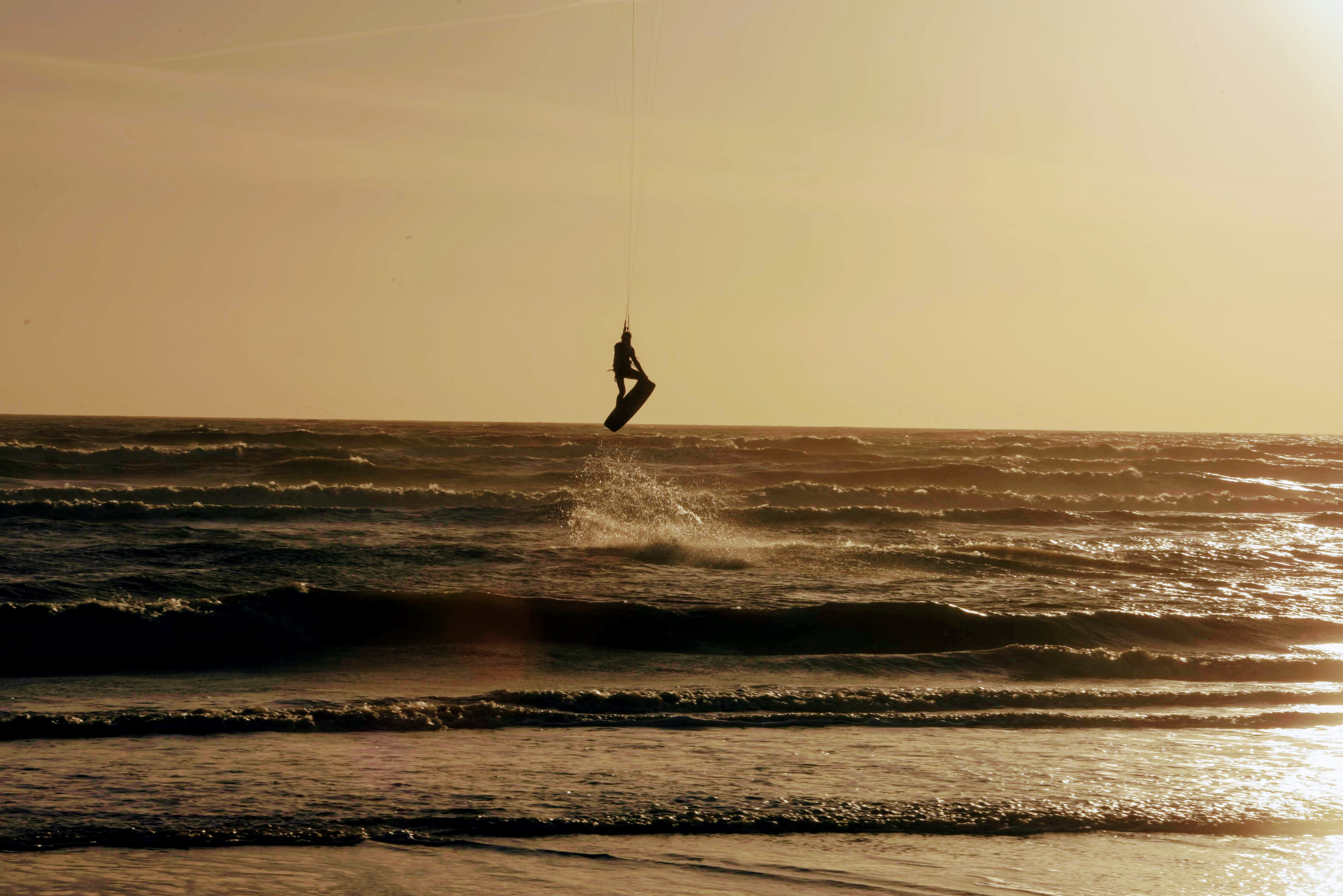 The kite is actually the easy part, POP is the hard bit. If you’ve mastered POP properly then you’re well on the way to learning to jump and trick.

The kite generates the majority of the lift in a jump and it does so in the same way it creates power to accelerate you forwards, by moving across the wind window.

For a jump, it’s just moving across the part of the wind window which creates lift, above your head…..

So you’re riding along with the kite in a normal ‘parked’ position of 10 or 2 o’clock. You start loading your edge to begin your POP and just as you build up the tension in the lines and rail of the board, it’s time to start sending the kite backwards, over your head.

The kite is aiming to go from 10 o’clock (or 2 o’clock dependent on which tack) through 11, 12 and finishing at around 1pm. So the movement of the kite is high above your head and not at all in front of you. This is a drastic change in direction from where it was so there does need to be some firm input into the bar.

Until now the bar has been in a normal position, somewhere around 4 – 6 inches away from the chicken loop, so the kite is responsive but not fully powered up.

As the kite turns backwards from 10 to 11 o’clock, this is the point the board should be released from the water signalling an end to the POP and simultaneously you’ll pull in the bar for full power. The catapult affect from POP, direction change from the kite creating upwards lift and fully powering the kite up by pulling in the bar all combine to get you airborne. 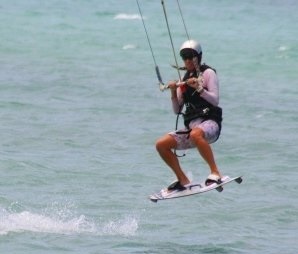 When in the air the same position should be adopted as when performing POP, knees tucked up with the board directly in front of you with the aim of landing directly downwind. Engage your core and this gives much better stability while in the air.

You should start practising with only a moderate amount of power in the kite and gradually increase as you become more confident.

While airborne what should you do with the kite? Nothing. Keep it at 1pm with the bar all the way in for full power (and therefore lift) as it’s essentially working like a parachute.

Common Mistakes While Learning to Jump – The Kite

The landing is probably the most important part of the jump and it’s where you could potentially injure yourself if not learnt correctly.

Kitesurfers often learn to jump with more power and aggression and therefore get more height before they’re able to land properly and consistently – it’s just a recipe for disaster!

The landing is essentially the same as a take off but in reverse, and it needs to create the same amount of lift with the kite or you’ll drop like a stone.

In The Air – Coming In To Land

You’re in the air, knees tucked up and are losing height as you’re coming back down towards the water. As you do so you need to steer the kite back from 1pm through, 12, 11 and eventually 10am as you touch down, while keeping the bar in the whole time. As you hit the water you can let the bar out to decrease power and regain control of your board speed.

It’s essential to do this movement with as much input into the bar as the take off, as you need the kite to create a lot of lift, otherwise you’ll crash down hard. Remember, the kite is still going over the top of your head and skirting around the edge of the wind window, without ever creating any forward pull. This helps you from landing with too much speed.

It’s not unusual to actually start travelling up slightly again or at least staying horizontal. This is a good thing as it’s a sign you’re creating plenty of lift.

As you come in to land, keep your legs slightly bent to absorb the impact and point the board straight downwind so you’re heading towards the kite. This will allow you to check your speed but will also take tension out of your lines so you’re easily able to control the power of the kite.

Just remember, this maneuver takes up a lot of space, even if you don’t travel far in the air, you need a lot of landing space before you’re back in full control and continuing along your track.

Learn How to Jump Higher Kitesurfing – The Timing

Everything about the jump and how successful it is comes down to the timing and how all the actions are tied together in sequence, with perfect execution.

During take off, the POP and board release from the water needs to tie in with the kite being sent backwards and bar being pulled in. During landing the kite needs to be sent back again with the bar in and board pointed downwind. The key for the landing is deciding when you need to start sending the kite back again to create the lift and give you a soft landing. Only you can figure out how quickly you’re falling and when you need the kite, but generally when you’ve fallen about 60-70% of the jump height, you need action the kite promptly.

If it’s a small jump while you’re learning, the kite may need to be redirected from the take off movement immediately and not held at 1pm (or 11am dependent on direction)

This video created by one of our ex instructors is well worth a watch.

Developing your ability to jump will unlock lots of potential for tricks and fun.

So give it a go, progress steadily, and ride safe.

How To Really JUMP & Improve Your Woo Score

Now you’ve learned the basics, it’s time to look at getting higher with more control and softer landings.

Here we look at ways to ride in stronger winds and get past the double figure mark on your WOO. 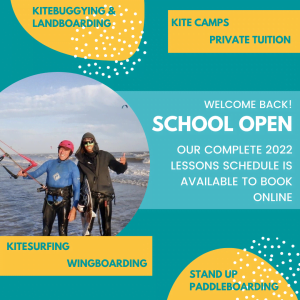